Longtime Anaheim Jr. Ducks players Cam York and Ryan Johnson have been selected to play for the 2021 U.S. National Junior Team that will compete in the IIHF World Junior Championship, which is scheduled to begin Christmas Day and run through Jan. 5 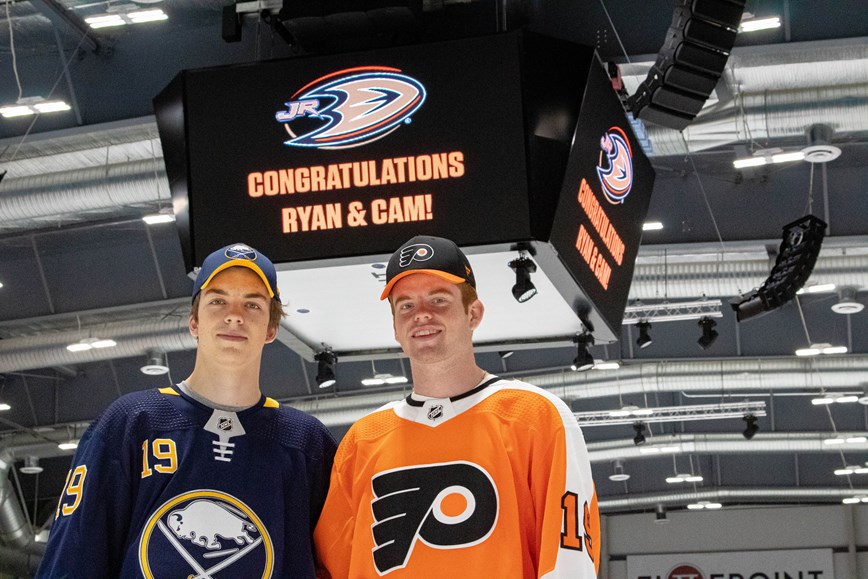 This marks the second year in a row that York has made the U.S. national team. Johnson’s selection comes one year after he was one of the final cuts from the preliminary roster for the 2020 squad and 30 years after his father Craig, the Jr. Ducks’ Director of Coaches, played in the tournament for Team USA.

“Congratulations to Cam and Ryan,” Jr. Ducks President Art Trottier said. “Both kids are hard workers, and they epitomize what youth hockey players are supposed to be.

“It’s a great day for them and their families, as well as for the Jr. Ducks.”

Johnson and York are among 25 who will travel to Edmonton, Alberta, for the tournament. They emerged from a 45-player evaluation camp in October and this past week’s 29-player training camp.

York played in all five U.S. games at the 2020 WJC at Ostrava and Trinec, Czech Republic.

York and Johnson, who are two of nine defensemen on the Team USA roster, are in their sophomore seasons of NCAA hockey. And both are off to strong starts.

In addition, York and Johnson became the first Jr. Ducks players to be taken in the first round of an NHL Entry Draft in 2019. The Philadelphia Flyers selected York 14th overall and the Buffalo Sabres tabbed Johnson 31st overall.

The defensemen were longtime teammates on the Jr. Ducks’ 2001 birth year team coached by Craig Johnson and Scott Niedermayer.

They are two of 28 players with ties to the Jr. Ducks who have made Division I college hockey commitments during the past seven seasons. Both made significant impacts during their freshmen seasons in the Big Ten Conference.

York was a finalist for the Big Ten Rookie of the Year after amassing 16 points in 30 games. He was fourth on the Wolverines in scoring, first among freshmen. He blocked 54 shots and was plus-9.

Johnson had eight assists and played in all 37 games for the Gophers as a freshman.

Neither defenseman is a stranger to international competition.

York, who played two seasons for the prestigious U.S. National Team Development Program, has won multiple medals – including gold – for Team USA at the U17 and U18 levels.